UNISON to step up campaigns on pay and social care reform 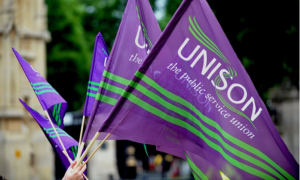 NEC agrees to ‘turn the temperature up on pay’, focus on public services in the lead up to the 6 May elections and maintain an international outlook.

UNISON’s number one priority remains the support of members who have been delivering public services for over a year into the COVID-19 pandemic, general secretary Christina McAnea told the union’s national executive council (NEC) at an online meeting today (Wednesday 7th April).

But the union is also focused on what will happen in the post-COVID recovery, particularly in terms of members’ pay, and it will work to ensure public services and the interests of the union’s members are central to the elections taking place across the UK on 6 May.

The union also continues to “look outwards”, with the general secretary warning that as long as COVID-19 rages in other parts of the world the virus can still “come back to harm us in the UK”.

Reflecting on a mixed few months, the general secretary said the Supreme Court’s decision last month, which failed to establish that care workers should be paid the national minimum wage for every hour of their sleep-in shifts, was a “major blow”.

“The decision makes a mockery of national minimum wage legislation,” said Ms McAnea, “but we will continue the fight. We will be keeping a close eye on employers changing rates of pay and we will be pushing the government to change the legislation.

“UNISON will be redoubling our efforts to achieve meaningful reform of social care across the UK.”

The general secretary also said that the fight for fair pay for members would be stepped up, with the union “raising the temperature on pay” with a coordinated campaign supporting individual sector-specific actions while taking account of national variations across the UK.

Pay would also feature in work across the union leading up to the various elections around the UK on 6 May for councils, police and crime commissioners and national assemblies. “The results of these elections will have a direct impact on the lives of our members,” the general secretary said.

Ms McAnea also noted that: “We continue to be a union campaigning on wider international issues and will continue to ensure that vaccines are being made available in developing countries. This is a global pandemic and it needs a global response.”

The NEC also passed motions ahead of the special delegate conference in June on the impact of COVID-19 on UNISON members, public services and working life and securing an equal and sustainable post-pandemic settlement.